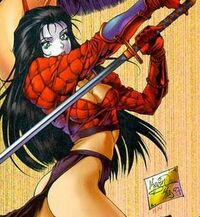 Ana Ishikawa is currently the manager of the Oike Gallery in New York. As Shi, she is a warrior, but she no longer kills. She has a strong Christian faith which keeps her from killing her enemies.

While protecting New York, Shi spotted a man who was going to attack a woman, however, after stopping the man, she found that both the man and woman were Vampires. She then fought the woman, and was able to remove her armlet, and escaped with it.

She returned home and showered, then she looked at the armlet, and she remembered an old Japanese folklore called Rashomon. This folklore was similar to what was going on, except for a few differences, such as the fact she took an armlet, not a hand. She locked the armlet in a hidden safe.

Three days passed and she decided to take it to her friend Auberon, to see if he could identify it. Ana went back to work at the gallery.

Four days later and Ana returned to Auberon's store. He said that the inscription was Enochian, the language of Angels, and it said "I will always love you -- mother". Ana decided to take it back home anyway, and when she was sitting on her bed, wondering what that woman was, her friend, Pete, stopped by. Nothing seemed out of the ordinary until Pete tried to leave with the armlet, and when Ana tried to stop him, Pete punched her across the face, to which she responded with slamming his face into the wall, and then kicked him in the head.

After the altercation with Pete, the mysterious woman, Vampirella, showed up and picked up her armlet. Ana then stabbed the woman in the chest with a sharpened silver crucifix, and then picked up her katana and pointed it at Vampirella's throat. After an explanation, Vampirella left.