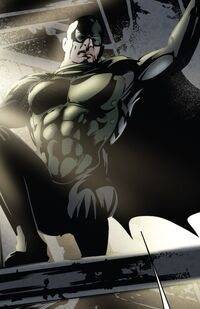 but what gives us the right to be judge, jury and executioner?

When The Justice Party was been elected power of New York State, it soon conspires that the newly-elected officials were controlled by powerful criminals, who quickly corrupted the law to their own advantage. A fascist police state was instituted and ordinary citizens were brutalised, oppressed and crushed into submission.

District Attorney Anthony Quinn had a small bright flash of light go off in his face while assisting a prison break, blinding him. Using gear from a member of the "Black Police", he became the vigilante known as The Black Bat and joined the vigilante team knows as Masks