Ash's Oldsmobile is preferred method of transport for Ash Williams. The car is mainly known for being brought back in time with Ash to 1300 AD, where it was modified with several weapons and dubbed "The Deathcoaster".

The Deathcoaster goes up in flames.

On Earth-818793, the Oldsmobile was destroyed on several occasions after Ash returned home from 1300 AD, but seemed to return every time Ash messed with the timestream. It was finally destroyed for good when it caught fire while Ash was going after The General.

In another universe, Ash left his car in 1300 AD, and was reunited with it when he was unwillingly brought back to that time by The Wise Man. 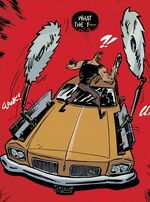 Another reality featured a Oldsmobile outfitted with two saws that came out from the sides. These saws were attached to the car by the students of the Alan Shepard High School shop class at the request of that reality's Ash.