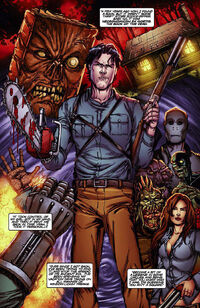 Every generation or so, a special baby is chosen by God Himself to combat the forces of evil that have been unleashed upon the Earth. In 1969, one of these Chosen Ones was born, but was found by a cult that worshipped the book known as the Necronomicon Ex-Mortis, or, the Book of the Dead[3]. It was this cult's duty to seek out the chosen baby an curse him to be tormented by the evil forces tied to the book. This baby was Ashley James Williams, and from his mid/late 20's into his mid-70's, he would be tormented by Deadites, creatures that can be unleashed by reciting passages from the Necronomicon. Ash's first encounter with these Deadites occurred when he and his girlfriend Linda travelled to a Cabin outside of Detroit, Michigan, where a college professor had accidentally unleash an evil force into the woods surrounding his cabin. Over the course of two nights, Ash had to kill a possessed Linda multiple times, cut off his right hand, and send the evil that roamed the woods back to the time from which it came using a spell from the Necronomicon. The spell worked, sending the evil (and Ash) back in time to 1300 AD, where once again Ash had to face the unleashed evil, but not alone like he had been at the Cabin. With the aid of the occupants of a medieval castle, Ash led the charge against an "Army of Darkness", which was led by his evil clone: Evil Ash. Good conquered evil when the battle was over, and Ash returned to the modern day, but before he and Linda had gone to the Cabin[4]. With the aid of a Wise Man who had journeyed to the present day from 1300 AD, the two went out to destroy the Book Of The Dead, only to accidentally resurrect Bad Ash and the Deadite Army. Once again, Evil Ash was destroyed and Ash thought his days of fighting the evil was over, but it was just the beginning for him[5]. His adventures would take him to the far future[6], facing off against Dracula[7], dying and ending up in the Marvel Zombies universe[8]., returning home to a dystopian world[9] and fighting the Four Horsemen of The Apocalypse[10] and the physical forms of The Seven Deadly Sins[11], gathering together other "Chosen Ones" to fight an evil spirit inside of himself (going by the name Hell's Prophet), fighting Freddy Krueger and Jason Voorhees twice[12][13], meeting Xena The Warrior Princess[14], and teaming up with Red Sonja, Dracula, The Re-Animator, Vampirella, Eva, Pantha and Athena to save the world in 2012 from Kulan Gath[15], and hired himself out as a monster hunter for hire[16]. 20 years later, a 50+ year old Ash found himself in a future where Evil Ash has taken over the world[17]. Reluctantly joining a team of werewolves, witches, and Frankenstein's Monster, Ash eventually succeeded in helping the team bring an end to Evil Ash's new "Army of Darkness". 30 years after those events, Ash (now in his upper 70s) was sent back in time to aid Xena one more time to take down another Deadite army[18]. After aiding Xena, the 70 year-old Ash's body was de-aged and sent back to the early 21st century[19].

Transmutation - Ash was temporarily able to change into a werewolf.[20]

Ash's Gauntlet hand that he constructed in 1300 AD gives his right hand superhuman-like strength compared to his regular left hand.

He can still be killed by what would normally kill humans, such as bullets, explosions and blades.

Appearances in Other Media