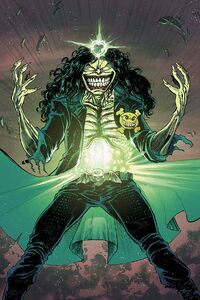 Ernest Fairchild (born sometime in June of 1993) was the only surviving member of the Fairchild family after his mother (who was pregnant with Ernest at the time), older brother, and father were killed in a car crash[1]. Unbeknownst to any of the Fairchild family members, the car was purposely wreaked by Ernest's father, who was possessed by a demonic spirit[2].

The young "Ernie" was put into foster care, and found himself living with the King family. The Kings, which consisted of Buford and Eunice, would both physically and verbally abuse Ernest. Ernest would try praying and asking God to help show the Kings that what they were doing was wrong, but by 2007, Ernest would go from asking God for help to asking Lucifer. His "prayers" to Lucifer would eventually be answered when Ernest began a ritual that involved sacrificing six-hundred and sixty-six sinners, one having to be Buford. Once all the sinners were killed, Ernest would be given powers to exact his revenge upon all of the world's sinners[3].

Ernest managed to kill 665 sinners by poisoning the Water Distillery Plant located in the town of Lucretia, but was caught by law enforcement before he could kill his last victim: Buford. After five years in prison, Ernest was sentenced to execution by electric chair.

Moments after his "death" in the chair, the spirits of the sinners entered Ernest's body, resurrecting him as Evil Ernie, a supernatural psychopath with a living demonic button called Smiley as his only companion. With Buford nearby to witness his foster son's execution, Ernie and Smiley fought their way through the Widmark Maximum Security Prison until coming face to face with Buford, who apparently had some supernatural enhancements of his own. Ernie killed Buford, and planned to escape with Dr. Thana Thomas (Ernest's only non-demon friend), but his battle against Buford managed to capture the attention of the U.S. Government, and a nuclear bomb was dropped directly on the prison. Distraught and angered by the loss of Dr. Thomas, Ernie decided to journey across the world in search of more sinners to kill[4].

Sometime after the events at Widmark, Ernie teamed-up with Chastity Marks to take control of Dr. Leonard Price's "Dream Probe", a machine that could control thoughts, and use it to make every sinner kill themselves as sacrifices to Mistress Hel. He was eventually "killed" when he created an energy explosion during a battle with Purgatori[5].

Ernie was resurrected sometime shortly after the battle with Purgatori when Lucifer offered him the chance to get revenge on Mistress Hel and her new lovers. Back in the world of the living, Ernie (and Smiley) met Mary Young, a woman who was snooping around what remained of Dr. Price's lab. Ernie, with assistance from Mary, managed to kill all of Hel's new lovers, such as Carrion Jane and Wicked Walter[6].

Continuing to travel with Mary, Ernie found himself at the center of another attempted revenge plot by Mistress Hel involving "The Fear Plague", created by Hel's brother Jormungandr[7]. Soon after these events, Ernie and Mary parted ways, and Ernie and Smiley were involved with an attempt to resurrect "The Godkiller", a creature feared by both the forces of good and evil[8].