Edit
watch 01:36
We're Getting Mutants in the MCU - The Loop
Do you like this video?
Play Sound
Mother's Milk 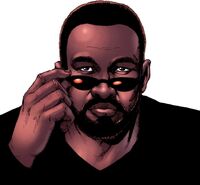 Lemme say this as plainly as I can, 'cause the way you talkin' right now, you kinda dancin' around shit: I ain't afraida Butcher. We clear on that?

Mother's Milk was one of the original members of The Boys, but had left the team to take care of his daughter as her mother was a drug addict. He later rejoined the team.

Superhuman Strength: Mother's Milk is the only member of The Boys who already had the Compound V inside of him, when his strength manifested he accidentaly beheaded a man with a punch.