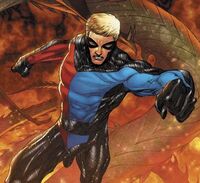 Peter Cannon was born in Tibet, where his American parents died while ministering to an order of monks laid low by disease. Out of respect for his parents' sacrifice, the monks chose Peter to be raised as their "Chosen One" and taught the secrets of the ancient scrolls which enabled him to unlock the secrets of the mind (angering the individual known as the Hooded One, who had assumed the secrets would be given to him). Eventually, the now adult Peter was tasked to return to the outside world with his friend Tabu (who was really a hallucination) and use the knowledge and powers he had been given for the betterment of mankind. He did this by adopting the identity of the masked superhero Thunderbolt, though he later chose to reveal his identity to the world. He has since encountered and been aided by two mysterious superhumans calling themselves Adam and Eve.

Peter has reached the peak of human abilities, enabling him to have superhuman levels of agility, strength and reflexes and the power to project images using his mind.

Peter is at the peak of human strength.