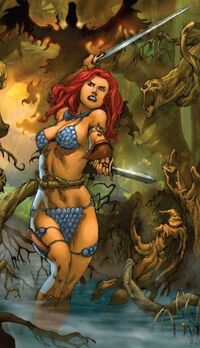 Red Sonja was born into a poor family living in a village on the Western Hyrkanian steppes in the Hyborian Age. Her life changed in a matter of hours when her family were murdered and her home destroyed by raiders, who also raped the young Sonja and left her crying. Answering her cries, the goddess Scathach came to her and granted her a gift-Red Sonja would become a warrior of unparalleled skill, but in return she must vow never to lie with a man who had not first beaten her in fair combat.

Sonja has battled many enemies including Suumaro, Kulan Gath and many bandits. Despite being an expert with many weapons, and her fighting ability was unmatched, she was eventually killed by Kulan Gath, but was later reincarnated as her descendant, Lady Sonja of Dorn.

Enhanced Strength - Sonja was blessed with extra strength, which helped her in battle.

Hunting - She was trained to hunt by her father while she was young.

Marksmanship - Her father taught her how to use a bow when teaching her to hunt.

Swordsmanship - Sonja is often unmatched in her ability to fight, especially when using her blade.

Unarmed Combat (Advanced) - She is an expert in hand-to-hand combat.

Weapon Expert - She was also an expert with weapons such as axes and daggers.

Sonja has an above average level of strength, often using it to her advantage and defeating even the toughest of men in battle.

She is prone to drinking too much, which has got her into bother on a few occasions.

Horse - She tends to use a horse as her mode of transport, though she has gone through several horses as they are often killed in battle.