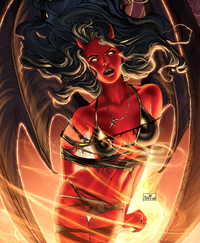 Purgatori was born in Ancient Egypt around 1390 BC, and raised in the city of Alexandria. Her parentage is unknown, save that she has the blood of the Fallen Angels in her veins. Her human name is Sakkara, and she was part of the team of slaves that built the burial tomb for Queen Ostraca. Sakkara's job was to grind corn all day under the desert sun, and she was constantly whipped by the brutish male guards. Amongst the slaves was a foreigner, an old man of Celtic origin who told Sakkara he knew a way to escape slavery and achieve immortality.

One day Sakkara was grinding corn when the Queen came to inspect the progress of her tomb. Sakkara was in the way of her chariot and narrowly escaped being run over. Ostraca wanted to punish Sakkara for not moving quick enough, but as soon as she saw her she was mesmerized by her beauty and her blue eyes. The Queen was well known for her love of women, and Sakkara became the newest acquisition to her harem. The two were married, and for a year Sakkara lived a life of luxury.

In Egypt, the situation with the citizens of Alexandria had grown steadily worse. The Queen realized that if they rebelled, she would never get her tomb finished. The general of her army, Ramses, made her an offer: if she married him and made him pharaoh, he would keep the population in check and ensure the completion of the tomb. He had one condition: Ramses must be her only lover, and all of her harem must die. Sakkara returned to the palace one night to find all the other girls dead. She fled into the night, in search of the old Celtic slave and his secret of immortality.

She found the old man as he was being attacked by guards. She killed them and he lived long enough to direct her across the desert to a cave set into a mountain peak. There she met Rath, an ancient Celtic vampire. She wanted to gain immortality for her revenge; he wanted a weapon to help him turn man from the civilized path to the wild ways that Rath advocated. Rath drank Sakkara's blood and fed her some of his own, turning her into a vampire. As Rath's blood mixed with her own, it combined with the strange blood of the Fallen Angels within her, transforming her into a creature with blood red skin, horns, glowing white eyes, and bat-like wings.

Sakkara returned to the Queen's temple on her wedding night and attacked the married couple and their guests. Amongst them were the samurai Jade and her father, and Kabala and her husband from Africa. Sakkara bit Jade and Kabala, turning them into vampires. She incited the citizens of Alexandria to rebellion, and they demolished the city. She then bit Ramses and Ostraca and entombed them in the Queen's burial sarcophagus. They were rescued five days later, but by then they had turned vampiric - starved of blood, they were wizened and insane, and would stay that way forever.