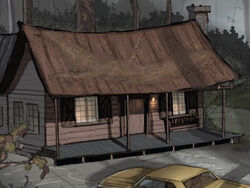 The Cabin is a small wooden shack located in the mountains of Michigan. Once owned by the Knowby family, the cabin and the property around it was the backdrop to a series of horrific events involving the accidental unleashing of Deadites, undead spirits that feast upon the souls of the living. Across the many universes in which it exists, the cabin also serves as the "birthplace" of Ash Williams, who upon having his first encounter with the Deadites there takes the first steps in fulfilling an ancient prophecy to become humanity's "Chosen One".

The Knowby Cabin on the Evil Dead Wiki