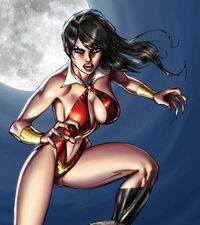 Vampirella's suit consisted of a red sling suit with a gold/yellow bat emblem on the crotch, and she also wore black boots. She would sometimes wear a leather jacket and black fingerless gloves with the sling suit and boots. Eventually, Vampirella began using normal clothing, but kept her original suit underneath.

There have been several similar suits created, most notably the one used by Chelsea Cantrell.