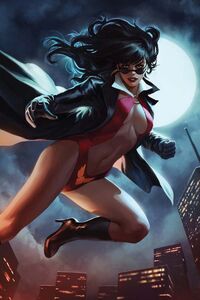 Vampirella is a Vampire who was born on Drakulon and was sent to Earth where she ended up working alongside the Danse Macabre to defeat the mortal embodiment of Chaos from another universe and other things. She has also fought countless enemies including Nyx, Von Kreist, Hemorrhage and her nemesis, Dracula. She has been killed on several occasions, most notably by Nyx, but would be resurrected, usually through the use of human blood.

Though she has many enemies, she also has numerous allies, which include Mordecai Pendragon and Adam van Helsing. She has also worked alongside a woman named Sofia Murray after saving her from Le Fanu, a Napoleonic era vampire, and along with Dracula, the two were able to defeat the Yag-Ath Vermellus and the Vampires which served it.

Sometime after defeating the Yag-Ath Vermellus, Vampirella joined a team put together by Dracula in order to prevent Kulan Gath from fulfilling the Mayan Prophecy and thus the destruction of the world. This team also included Dracula, Pantha, Eva, Red Sonja and Herbert West.

Immunity to Ultraviolet Radiation - She is immune to sunlight, unlike most Vampires.

Community content is available under CC-BY-SA unless otherwise noted.